North Korean troops had invaded South Korea on 25 June 1950, however, the potential implications of the war did not impinge on those of us due to return to Britain for release from National Service. Together with fellow conscripts with whom I had trained from Oswestry and on Salisbury Plain through the summer of 1949, I embarked on the Empire Fowey in late August to return to Southampton and the UK for demobilization.

We sailed only shortly before it was agreed that Britain would join the United Nations forces in Korea. The Middlesex Regiment was advised on 23 August of their to move north, sailing to Pusan two days later. The 15 Observation Battery in Hong Kong was retitled as the 15 Locating Battery before it also moved to Korea in December 1950.

Shortly into our voyage of four weeks came the Parliamentary announcement on 12 September that an extra six months service would be added to my entry group of early April 1949; all subsequently engaged National Servicemen were to serve a full two years. An addendum to the announcement conceded that the extra six months would be waived for those due to start university in October, which released me as one of the relatively few National Servicemen serving for only 18 months. Colleagues returning to Britain who had joined with me at Oswestry on the same day in April 1949, and with whom I had since shared Salisbury Plain and my time in Hong Kong remained in uniform, undertaking time-killing trivial duties until their later freedom. 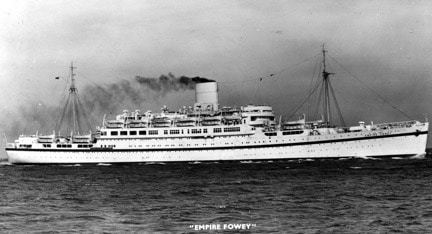 The Empire Fowey was a former German troopship taken over at the end of the War in 1945, providing a much more comfortable trip than that out to Hong Kong. Although an older vessel than the Devonshire and built in Germany, the living environment on the Empire Fowey was much superior to that of our outward passage six months earlier. There was relative comfort in sleeping with fold-down standees in place of hammocks; meals were eaten in canteen space, not on the deck where lived and slept. Assigned to work washing trays in the steam sodden galley brought out on me on an outbreak of prickly heat, persisting into early years of civilian life and coming to the surface customarily, curiously and particularly in Binn’s department store in Edinburgh.

Another memory is of a film show on a starry evening on the open deck passing through the South China Sea; bizarrely, we were watching ‘Scott of the Antarctic’ as we lounged on deck on the warm tropical evening.

We would like to increase the number of contributions to this section, and would be delighted to publish stories and images recounting other gunners … END_OF_DOCUMENT_TOKEN_TO_BE_REPLACED