John Flann was born in 1930 in Surbiton, Surrey and educated at Tiffin Boys Grammar School, Kingston upon Thames. In 1946 he started work in the Valuation Department, Surbiton Borough Council and in 1949 was conscripted into the Army for his National Service.

When that was complete and leaving the army in 1951 he went back to his old job in Surbiton. That soon palled and he went to the Estate Department of British Railways working in London, and the North West 1. Having earlier obtained his professional qualifications as a Chartered  Valuation Surveyor he then continued his professional career in the Valuation Office, Inland Revenue in 1961 at Preston and after service in Lancashire,London and Kent, retired from his post as District Valuer and Valuation Officer, Tunbridge Wells, in 1990.

On retirement, he and his wife Jeanne, whom he had met and married in Liverpool, immigrated to the USA where their two sons Christopher and Nicholas had first studied and then settled. They lived first in Montana, and now in Utah. 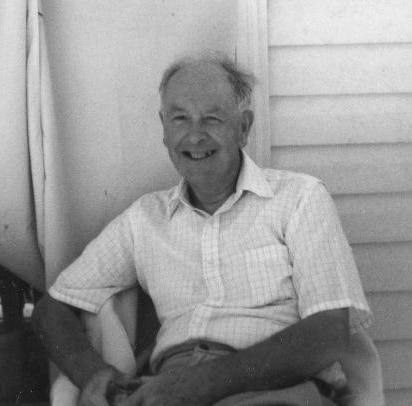 Off Parade in retirement, Gunner John Flann enjoys his deck at his home in Smithfield, Utah, USA.

NOTE: This is a personal memoir. It is for my family, friends and those interested in social and military history. The copyright is mine. No part of it may be used or reproduced in any form for commercial use whatsoever. For other purposes written consent is required. If you wish to use or reproduce anything published here, you may contact me.

We would like to increase the number of contributions to this section, and would be delighted to publish stories and images recounting other gunners … END_OF_DOCUMENT_TOKEN_TO_BE_REPLACED