Entry and training – How does one end up in the National Service? Soon after my eighteenth birthday in December 1950, I received a brown envelope marked OHMS ordering me to report to a Drill Hall in Blackheath for a medical examination. Without question I attended and after an interview, a sight and hearing test, finally dropping my trousers to be poked with a swagger stick and told to cough (I did not ask where the stick had been before my turn), the result was Passed A1. Then it was back to work as a Trainee Surveyor on a building site.

Early Spring I received some documents, a travel warrant to be exchanged at Paddington Station for a ticket to Gobowen, a station in Shropshire, and to take my Ration book. It was on the 5th of April when I arrived and I could see snow still on the tops of what seemed mountains, before being loaded into lorries and transported to Park Hall Lines, Oswestry. This was a complete shock: being ordered about, collecting uniform and equipment, marching to meals, wrapping civilian clothes in brown paper and sending them home.

The main thing was you became a number. This was duly written on a cigarette packet or the back of your hand. This proved to be unnecessary, as after 60 years I can still reel it off and the shortened version, the last three. Drill took place on the square or if it was raining in corrugated roof, open-fronted sheds. After two weeks we were allowed to wear a cap badge, have a group photo which cost half a crown and go into Oswestry. 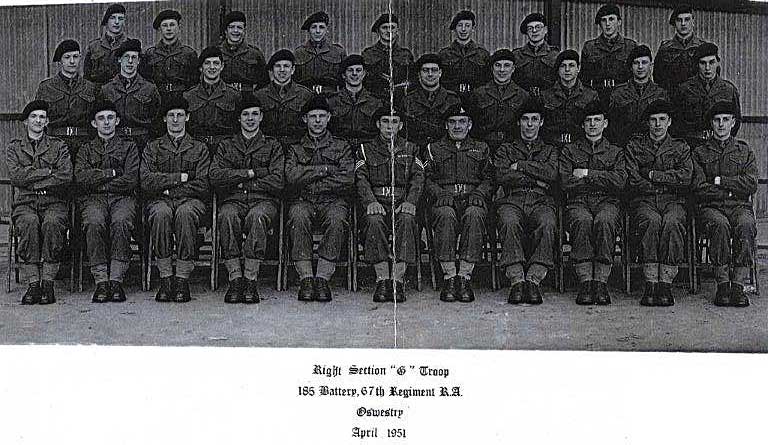 Gunner Olmit, front row, Left hand side, at the end.

We were then selected for various training regiments and I was sent to the School of Artillery for survey training. How we traveled from Shropshire to Wiltshire is a complete mystery.

We would like to increase the number of contributions to this section, and would be delighted to publish stories and images recounting other gunners … END_OF_DOCUMENT_TOKEN_TO_BE_REPLACED