We were soon on our way up country northward to the current frontline, the Commonwealth Division’s position being just north of the 38th Parallel, where the war had started and by train with very basic comfort. 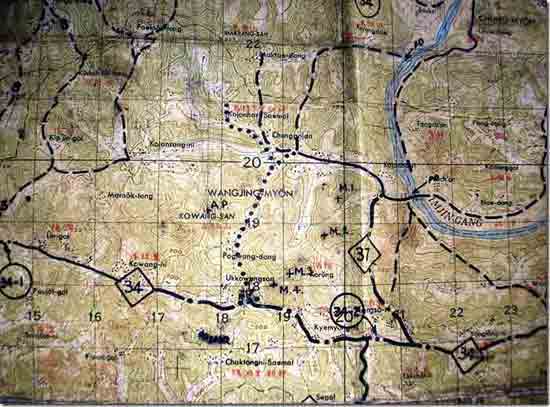 The A.P. on Kowang-Sang (Hill 355/Little Gibraltar), also showing the location of the sound ranging microphones.

On arrival at a base camp and the next morning, and I and others posted to 15 Locating Battery’s Able and Baker Sound Ranging Troops, were taken by a 3 ton truck to join our respective Troops. As we were being driven north, a barrage of 25 pounders came as a bit of a thunderous shock! I joined Baker Troop at its base camp just behind Hill 355 (commonly known as Little Gibraltar). This was the most easterly point of the Commonwealth Division’s responsibility, with The Hook feature being it’s most westerly. Little Gibraltar was a very important feature and had been held by both sides during the war.

We would like to increase the number of contributions to this section, and would be delighted to publish stories and images recounting other gunners … END_OF_DOCUMENT_TOKEN_TO_BE_REPLACED